“The crucified, resurrected, and exalted Christ” by Herman Bavinck.

“It is the crucified but also the resurrected and exalted Christ whom the apostles proclaim. From that vantage point of the exaltation of Christ, they view and describe His earthly life, suffering, and death.

For the work He now carries out as the exalted mediator, He laid the foundations in His cross. In His battle with sin, the world, and Satan, the cross has been His only weapon.

By the cross He triumphed in the sphere of justice over all powers that are hostile to God. But in the state of exaltation, consequently, He has also been given the divine right, the divine appointment, the royal power and prerogatives to carry out the work of re-creation in full, to conquer all His enemies, to save all those who have been given Him, and to perfect the entire kingdom of God.

On the basis of the one, perfect sacrifice made on the cross, He now—in keeping with the will of the Father—distributes all His benefits. Those benefits are not the physical or magical after effect of His earthly life and death; the history of the kingdom of God is not an evolutionistic process.

It is the living and exalted Christ, seated at the right hand of God, who deliberately and with authority distributes all these benefits, gathers His elect, overcomes His enemies, and directs the history of the world toward the day of His parousia.

He is still consistently at work in heaven as the mediator. He not only was but still is our chief prophet, our only high priest, and our eternal king. He is the same yesterday, today, and forever.

There is, of course, an enormous difference between the work Christ did in His humiliation and what He accomplishes in His exaltation. Just as after the resurrection, His person appeared in another form, so also His work assumed another form.

Nevertheless, His mediatorial work is continued in heaven. Christ did not ascend to heaven in order to enjoy a quiet vacation at the right hand of God, for, like the Father, He always works (John 5:17).

He went to heaven to prepare a place for His own there and to fill them here on earth with the fullness that He acquired by His perfect obedience. What He received as a reward for His labor for Himself and what He received for His own cannot be separated. He is all and in all (Col. 3:11).

It is God whose fullness fills Christ(Col. 1:19), and it is Christ whose fullness in turn fills the church(Eph. 1:23). The church can therefore be described as His pleroma, that which He perfects and gradually, from within Himself, fills with himself (Eph. 4:10), and is therefore itself being filled by degrees.

The union between Christ and the church is as close as that between the vine and the branches, between bridegroom and bride, husband and wife, cornerstone and building.

Together with Him it can be called theone Christ (1 Cor. 12:12). It is to perfect the church that He is exalted to the Father’s right hand.

Just as through His suffering and death Christ was exalted in His resurrection and ascension to be head of the church, so now the church has to be formed into the body of Christ.

The work of the Mediator is one grand, mighty, divine work that began in eternity and will only be completed in eternity.”

“A disarmed and conquered enemy” by Richard Sibbes.

“Even death itself, which is the end of all, though it be fearful and irksome to nature, yet it is to God’s servants a bed of down, easing them of all their miseries, and putting them in possession of an heavenly kingdom.

Therefore saith Solomon, ‘The day of death is better than the day of birth,’ Eccles. 7:1. God will be the God of His, not only unto death, but in death.

Death is the death of itself, and not of us. It is a disarmed and conquered enemy to all the faithful; for which cause St Paul desired to be dissolved and to be with Christ, which is best of all, Philip. 1:23.

Death, albeit it seems terrible and dreadful, yet the sting thereof being taken away by the death of Christ, it brings everlasting joy along with it.

Death is only as a grim porter to let us into a stately palace.

Whither tend all the troubles we meet with in this world, but only to fit us for a better condition hereafter, and to assure the soul that when earth can hold it no longer, heaven shall.”

Selected from “Spurgeon Gems”
” Notable quotations on relevant subjects
from the ‘Prince of Preachers’ “
Charles H. Spurgeon (1834-1892)
WORTH THE TIME TO READ THE QUOTES. 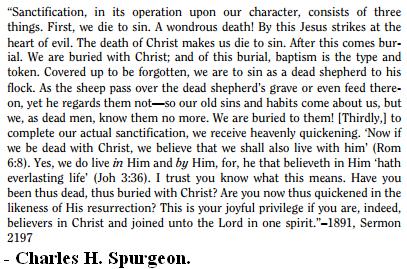 “Why didn’t God create a world where everyone would go to heaven?”
by Lenny Esposito.

“The day may come when after a long fight with disease, we shall feel that medicine can do no more, and that nothing remains but to die. Friends will be standing by, unable to help us. Hearing, eyesight, even the power of praying, will be fast failing us. The world and its shadows will be melting beneath our feet. Eternity, with its realities, will be looming large before our minds.

What shall support us in that trying hour? What shall enable us to feel, ‘I fear no evil’? (Psalm 23:4.) Nothing, nothing can do it but close communion with Christ. Christ dwelling in our hearts by faith,—Christ putting His right arm under our heads,—Christ felt to be sitting by our side,—Christ can alone give us the complete victory in the last struggle.

Let us cleave to Christ more closely, love Him more heartily, live to Him more thoroughly, copy Him more exactly, confess Him more boldly, follow Him more fully. Religion like this will always bring its own reward. Worldly people may laugh at it. Weak brethren may think it extreme. But it will wear well. At even time it will bring us light. In sickness it will bring us peace. In the world to come it will give us a crown of glory that fadeth not away.

The time is short. The fashion of this world passeth away. A few more sicknesses, and all will be over. A few more funerals, and our own funeral will take place. A few more storms and tossings, and we shall be safe in harbour. We travel towards a world where there is no more sickness,—where parting, and pain, and crying, and mourning, are done with for evermore.

Heaven is becoming every year more full, and earth more empty. The friends ahead are becoming more numerous than the friends astern. ‘Yet a little time and He that shall come will come, and will not tarry.’ (Heb. 10:37.) In His presence shall be fulness of joy. Christ shall wipe away all tears from His people’s eyes. The last enemy that shall be destroyed is Death. But he shall be destroyed. Death himself shall one day die. (Rev. 20:14.)

In the meantime let us live the life of faith in the Son of God. Let us lean all our weight on Christ, and rejoice in the thought that He lives for evermore. Yes: blessed be God! Christ lives, though we may die. Christ lives, though friends and families are carried to the grave. He lives who abolished death, and brought life and immortality to light by the Gospel.

He lives who said, ‘O death, I will be thy plagues: O grave, I will be thy destruction.’ (Hos. 13:14.) He lives who will one day change our vile body, and make it like unto His glorious body. In sickness and in health, in life and in death, let us lean confidently on Him. Surely we ought to say daily with one of old, ‘Blessed be God for Jesus Christ!’”

“Part 2, Christianity’s answer to the justice of God”
by STEVE BRUECKER

“Stir up the soul against sin” by Thomas Brooks
“That Christ should come from the eternal bosom of His Father to a region of sorrow and death; that God should be manifested in the flesh, the Creator made a creature; that He who was clothed with glory should be wrapped with rags of flesh; He who filled heaven and earth with His glory should be cradled in a manger.

That the almighty God should flee from weak man—the God of Israel into Egypt; that the God of the law should be subject to the law, the God of the circumcision circumcised, the God who made the heavens working at Joseph’s homely trade; that He who binds the devils in chains should be tempted.

That He, whose is the world, and the fullness thereof, should hunger and thirst; that the God of strength should be weary, the Judge of all flesh condemned, the God of life put to death; that He who is one with His Father should cry out of misery, ‘My God, my God, why have you forsaken me?’ (Matt. 27:46).

That He who had the keys of hell and death at His belt should lie imprisoned in the sepulcher of another, having in His lifetime nowhere to lay His head, nor after death to lay His body.

That that HEAD, before which the angels do cast down their crowns, should be crowned with thorns, and those EYES, purer than the sun, put out by the darkness of death; those EARS, which hear nothing but hallelujahs of saints and angels, to hear the blasphemies of the multitude.

That FACE, which was fairer than the sons of men, to be spit on by beastly wretched men; that MOUTH and TONGUE, which spoke as never man spoke, accused for blasphemy; those HANDS, which freely swayed the scepter of heaven, nailed to the cross.

Those FEET, ‘like unto fine brass,’ nailed to the cross for man’s sins; each sense pained with a spear and nails; His SMELL, with stinking odor, being crucified on Golgotha, the place of skulls; His TASTE, with vinegar and gall.

His HEARING, with reproaches, and SIGHT of His mother and disciples bemoaning Him; His SOUL, comfortless and forsaken; and all this for those very sins that Satan paints and puts fine colors upon!

Oh! How should the consideration of this stir up the soul against sin, and work the soul to fly from it, and to use all holy means whereby sin may be subdued and destroyed!”

The Eyes of My Heart

Stay true to His calling

Find the tips, tricks, and techniques

from a spark to a flame

fan into flame the gift of faith

Whats happing in the tech world

Into the Light Adventures

My Wordpress
A.C. Stark
My Insights

For God so loved the world

Listen to your inner self..it has all the answers..